May Day Is Hawaii’s Lei Day! 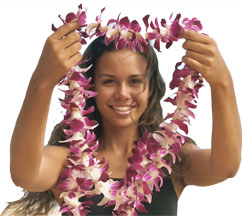 The Lei is as synonymous with Hawaii as Aloha and the Shaka. When Don Blanding first suggested “Lei Day” back in 1927, he had no idea that it would soon became an annual holiday. It was made official in 1929 and since then, the 1st of May has been known here in Hawaii as Lei Day. Lei Day celebrates the history and  tradition of the lei and festivities throughout the islands include food, music, lei making demonstrations and contests, and in some cases the crowing of a Lei Queen and her court.

Originally made of flowers, shells, leaves and even bones, leis were worn as accessories by the Polynesian settlers in Hawaii, but throughout history the giving and receiving of a lei has always been symbolic. They are given as a gift or sign of affection. In the early days, leis were exchanged between chiefs of warring tribes as a symbol of peace. Today, leis are given at weddings and graduation ceremonies, and are often given as anniversary and birthday gifts or to welcome the birth of a child.

When you visit Hawaii, it’s common to have a lei bestowed upon you as a warm welcome to the islands. This will be your first official introduction to our famous Aloha spirit. A lei is meant to be worn gently draped over the shoulders with equal parts hanging down on your chest and back, though you’ll often see visitors wearing it as more of a necklace. Because the lei is considered a sign of affection, it is impolite to refuse a lei and you should never take it off in front of the person who gave it to you.

You can learn more about the history of the lei at one of Hawaii’s biggest Lei Day events in Honolulu. Visit their site for more information.  http://www1.honolulu.gov/parks/programs/leiday/index.htm