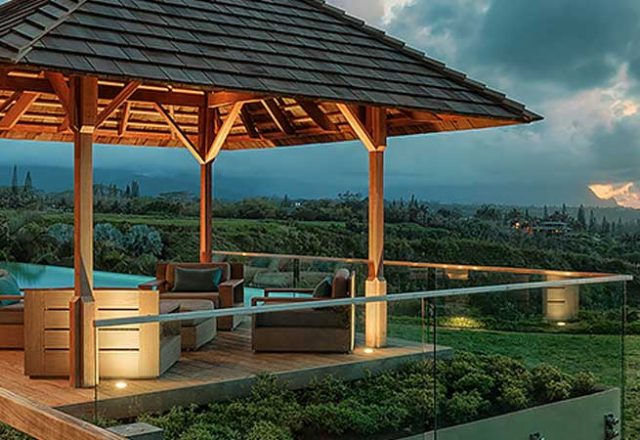 We are proud to offer our fine-tuned luxury product while spreading the extraordinary spirit of Aloha.

Most people envy me for living in a small beach community in Northern California and I do feel fortunate…nine months of the year. Then there’s summertime, when the locusts, otherwise known as family and friends, invade. They clean out my refrigerator, drag sand all over my hardwood floors, and force me to take their “perfect” children on sightseeing trips that involve lots of spilled ince cream, running to the bathroom and skinned knees. I gratefully return to the office for a rest only to find my in-box overflowing, my cell phone maxed with messages, and emials bouncing back. Obviously, it’s time to reboot–not my technical gadgets–me.

This year I got smart and turned my guest room into an office. When my family complained, I suggested we rent a home in Hawaii. Few of us can afford a multi-million dollar Maui beachfront home like Clint Eastwood, but if you pool your dollars your family and friends can rent on and live the way you deserve to–at least for a week. Best of all, no one has to lift a finger.

Hawaii Hideaways, (www.hawaiihideaways.com) will arrange everything including: booking a plane ride on a commercial or private jet, unpacking your bags, teaching private yoga lessons on the sand, or helicopter you to a private golf course on a neighboring island. “We have concierges on call 27/7,” says CEO Anne Pawsat-Dressler. “If you can dream it up, we can do it. There’s no such thing as a bizarre request. I had a businessman from China who sent his king-sized bed ahead of him and we installed it in the house before he arrived.”

You can also eliminate the arguments about whose turn it is to cook by hiring a private chef. I’d heard through the coconut telegraph about Chef Dan Fiske (www.privatemauichef.com) who will cook breakfast, lunch and dinner any time of the day or night. “I’ve had stockbrokers from New York who turned the living room of a rented villa into a makeshift office with computers, printers and fax machines and ten phone lines,” says Fiske. “They wanted breakfast every day at two am before the Stock Exchange opened, so I was their with their lattes each morning for a month.”

Once a man with a terminal illness called Dan and said he wanted to mend rifts within his family before he died. He rented an eight-bedroom home in Maui for his children and grandchildren and had Chef Dan prepare all their meals. “It worked out great. The little kids got to sit at the counter, eat spaghetti and watch me cook while the adults ate fillet mignon with a blueberry demi-glaze in the dining room,” says Fiske.

Chef Dan can also will take you to his roots, so to speak, and amke dinner in the middle of the Aina Lani Farm near the Up Country Maui town Pukalani. I helped him pick vegetables and fruits from the garden, sliced and diced a bit, then watched him perform culinary magic as I sipped champagne and sampled pupus Our meal started with a salad of country mustard greens tossed with confetti of rainbow carrots and shaved baby fennel and topped with Surfing Goat cheese, (no Hawaiian goats don’t surf, that’s just the name of the cheese), candied walnuts, and lilikoi lime basil vinaigrette, followed by his famous crispy skin Onaga fish (also called Ruby Snapper). While the sun set over the avocado trees, I requested that the ukulele musicians play Tiny Bubbles for my family. Despite the fact that Hawaiians have sung this tune so often for mainlanders it must give them nightmares, they graciously sang the Don Ho classic. Maybe it helped that I shared our dessert with the band… basil leaves dipped in chocolate, an unusual sounding combination, but the perfect contrast between tart and sweet sensations.

Sometimes even I get tired of a private chef (just call me Prince Richard) and just wnat to explore the neighborhood restaurants. I had heard of this new concept called “open cooking” at Capische in Wailea, a trendy Italian restaurant. Those in the know go downstairs to the II Teatro room where chefs Brian Etheredge and Christoper Kulis have adapted the Benihana style of cooking in your face. Instead of Japanese food however, they’re serving Northern European specialties. As you sit at counter, the chefs prepare a five-course meal including duck confit, ahi steak, and a local fish called Opakapaka. A different wine from the around the world accompanies each course.

Of course there’s more to Maui than beautiful sunsets, palm trees blowing with the trade winds and great food…there’s a rich culture that somehow I’ve managed to miss in my previous visits to the islands. Open Eye Tours (www.openeyetours.com) gave me a new appreciation of Paradise. “We develop custom excursions for visitors, depending on their interests,”says propriertor Barry Fried. ” I’ll take doctors to sacred waters and healing temples and architects to see examples of the first thatched huts built on the island. “His most popular request is nature walks in lava fields or tropical rain forests, places the average tourist would never find.

Mr. Fried took us in his jeep to the lava fields closest to our Makena Beach villa, and we were the only ones there discovering petroglyphs and spotting wild goats running free. He taught us a few Hawaiian chants, showed us tropical plants that can be used as a lotion and shampoo and maybe even grow hair, but as he looked towards my sparse scalp, he admitted he couldn’t promise miracles.

To relaly feel the Aloha spirit, you have to get in the water. Known for their advanced water skills (it has now been proven that ancient Hawaiians sailed to New Zealand!), the Wa’apea canoe has been preferred mode of travel for centuries. The boat is launched from the sand, with passengers helping to push it through the surf and then jumping on board. These boats (www.mauisailingcanoe.com) seat six to eight people who sit on large trampolines with legs and feet dangling off the front as they search for glimpses of sea turtles, manta rays, migrating humpback whales, and dolphins.

if your wallet is lighter than usual, there are plenty of free activities in Maui. Wake up early to catch the sunrise atop Haleakala volcano (or let your family go and tell you about it while you sleep late like me and opt to watch the sunset), stroll through historic Lahaina and learn about Maui’s whaling past, pop into the Lahaina Yacht Club and pick up a hat or tshirt to impress your friends when you get back home, and drive the long and winding road to Hana’s black sand beaches. Along the way, stop at small mom and pop fruit stands, (often unattended), with bananas and guava sitting atop wooden crates next to an honesty box requesting money. What a concept! Many I’ll install one in my home for the next time somone visits.

The best thing about a Maui vacation is that it can last all year if you can adopt an Aloha mentality. Before you get back to work and wrapped up in returning your voice and emails, do yourself a favor, get your friends or family dialed into a trip to a place where blackberries are picked from trees,not answered.