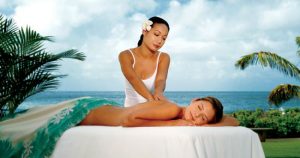 If you’re looking for luxury in Hawaii, the search ends with an authentic Lomi Lomi massage.

Brought to Hawaii by the early Polynesian settlers and practiced for centuries by the Kahunas, Lomi Lomi is an ancient healing art that restores the recipient mentally, physically, and spiritually. In ancient times, children as young as five were selected as the healers of the future and the art took years to master. Similar to the Hula, the practice of Lomi Lomi went underground after the American missionaries arrived in Hawaii as it was considered heathen, but the sacred art continued to thrive in private and is now regarded as one of our state’s most precious gifts, and a must have for Hawaiian vacationers!

Translated, Lomi Lomi means to massage, knead, rub or soothe. Practitioners use their forearms, palms, fingers and elbows; administering long, gentle strokes across the body to release tension in the recipient, but the spiritual component is where it differs from other forms of massage.

Hawaii is famous for its Aloha spirit, and Lomi Lomi is no different. Practitioners set a loving and healing intention prior to the start of the treatment, and often incorporate Hula or mele’s (chants) in to the massage to assist with the flow of energy. Much of the Lomi Lomi practice is intuitive so the pace and intensity can increase or decrease depending on the practitioner’s assessment of the recipient’s individual needs. Like gentle waves flowing across the body, a Lomi Lomi massage encourages deep relaxation along with the release of tension, toxins, and energy blockages. Because the ancient Kahunas believed that energy blocks occur in the joints, a practitioner may also gently stretch and bend a recipient’s elbows and knees to release and redirect the flow.

Lomi Lomi massage is known to improve circulation and immune function, facilitate the release of toxins, and recipients have also reported reduced headaches, insomnia relief, and a general improvement in common aches and pains.

We’ve included a link to a video here to see what a typical Lomi Lomi massage entails: https://www.youtube.com/watch?v=SCu_Sua-D4o

If you are looking for a truly authentic experience, and some added luxury for your Hawaii vacation, a Lomi Lomi massage is the way to go. Please remember that our concierge is on-hand and happy to assist with recommendations and bookings.