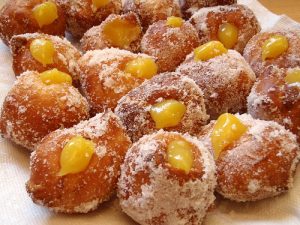 Hawaii is considered a melting pot with people of all cultures making their home in our beautiful state. While there are many benefits to having such a diverse population, most would agree that food is one of the biggest! Our Shave Ice came from Japan, Kimchi  from Korea, the Chinese brought dim sum, but one of our favorites was introduced by the Portuguese; the Malasada.

To call a Malasada a donut would be doing this popular ono (treat) a disservice, however if they must be likened to something, a donut would be the closest bet. Malasadas are deep fried balls of dough that are rolled in / dusted with sugar or cinnamon while they are still hot. This may sound similar to a sugar donut; however a malasada is slightly chewier, and a bit fluffier than your average donut. They are every bit as delicious and according to anyone who has tried them, even more so. Some varieties include a filling of custard, chocolate and even more tropical flavored creams or jellies like coconut and mango.

So loved are our Malasadas here in Hawaii, that we’ve dedicated an entire day to them. Malasada Day falls on Shrove / Fat Tuesday which got its start as the feast prior to Lent. The Portuguese immigrants who brought the recipe to Hawaii would make Malasadas to use up all of the lard and sugar in the home before the start of Lent. The recipe quickly spread throughout the islands and to this day they remain a favorite of all.  Malasadas are a staple at parties, local festivals, and concerts, and you’ll even find them on food trucks.

Because we don’t recommend leaving Hawaii without having tasted this island favorite, we’ve included links to two of the best places in town to get your hands on these delicious treats!

I just wanted to let you know that our stay on Oahu at Honeyed Jade was amazing. My family was blown away by the beauty of the house and the kindness of the Property Manager. We loved the house cockatoo, Lola. She was the life of the party! Thank you to you and Iris for all your help and professionalism. It was greatly appreciated.

The house was perfect!

We had a wonderful trip last week- thank you for all your help. The house was perfect!

We truly enjoyed our time on Maui! Very satisfied customer!

From the moment we contacted Sunny, our every need and desire to create a dream trip was effortless.  She took care of shopping, dinner reservations and answered every ‘stupid’ question like a true professional.

Any small issue with the house was taken care of promptly by Eric. Always polite and understanding to our requests, he fixed things in a flash!

Great Location on the Beach

The Best of Maui!