Exploring the World’s Most Active Volcano: Part I 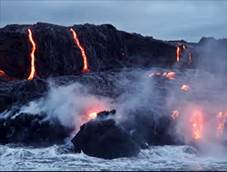 Editor’s note: This is the first entry in a two-part series on the volcano tours in Hawaii. The second will be published next week.

“Geology is the study of pressure and time.” — Morgan Freeman in The Shawshank Redemption (1994).

Look: Mother Nature is boss. No matter how many satellites we deploy, no matter how many gadgets we invent, no matter what other technological marvels we conjure, it all pales in comparison to the awesome power of the natural forces that dominate our little planet.

And there’s no better place to witness these forces—the forces of pressure and time, as Morgan Freeman so memorably put it—than at the Kilauea volcano on the Big Island. Bright orange lava flows, black crystalline rock formations, the majesty of the birth and re-birth of the very earth itself: It’s all here on the Big Island’s youngest—and the world’s most active—volcano.

But there’s more to this sprawling, geological wonder than magma and gorgeous desolation. There’s also a relationship between it and the Hawaiian people, as the USGS reports on its site:

Kilauea is the home of Pele, the Hawaiian volcano goddess. Hawaiian chants and oral traditions tell in veiled form of many eruptions fomented by an angry Pele before the first European, the missionary Rev. William Ellis, saw the summit in 1823. 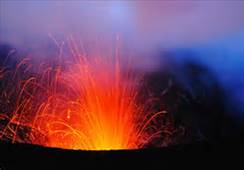 There are two basic ways to experience Kilauea, and they both use as their jumping off point the Hawaii Volcanoes National Park. The first: take the 11-mile Crater Rim Drive to the summit. This is a breathtaking trip that passes through an ever-changing landscape of rain forest and desert, as well as the caldera (the concave area marking the collapse of the volcano during eruption). Time: about three hours.

The second way: Descend 3,700 feet by taking the 20-mile long Chain of Craters Road. This route takes you along the East Rift and Coastal area and, like Crater Rim Drive, features a spectacular, ever-shifting topography. In 2003, an eruption spilled lava across the road, which is where this route ends. So be sure to check the visitors center for the latest info on lava flow. Time: about five hours.

We’ll get into more detail about other volcano tour options in our follow-up post next week.

Hawai?i Volcanoes National Park is open 24 hours a day year-round, including ALL holidays. The Kilauea Visitor Center is located on Crater Rim Drive off of Highway 11 between the 28 and 29 mile marker south of Hilo.