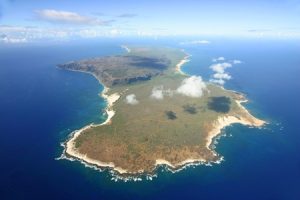 About eighteen miles southwest of the Garden Island (Kauai), sits Hawaii’s “Forbidden Island”, also known as Niihau. Pronounced “Knee-ee-how”, with fewer than 200 residents, it is the least inhabited of the Hawaiian Islands. Once owned by Royalty, Niihau was purchased from King Kamehameha in 1864 and up to 1987, visits to the island were typically restricted to the owners and their guests, or government officials, which is how it gained its moniker; “The Forbidden Island”.

Elizabeth Sinclair purchased Niihau for $10,000 and made a commitment to King Kamehameha that she would preserve the culture for the Hawaiian people living there. Currently co-owned by her grandsons Keith and Bruce Robinson, the family has upheld this commitment over the years as the island’s ownership continues to be passed down through generations.

Time has almost stood still on Niihau. The remaining residents live in the small village of Pu’uwai and the locals are mostly self-sufficient living off of the land. They hunt and fish for food and have additional supplies brought in from Kauai. There is no telephone service, no hotels, no paved roads, only a handful of cars, and the island is entirely solar powered. The primary language spoken on Niihau is Hawaiian.

Niihau gets very little rain so the lush flora and fauna found on Kauai and the other islands is noticeably absent. It is for this reason that the leis traditionally made on Niihau are so unique and to this day can fetch upwards of $1000. Because there are few flowers, natives of Niihau have historically made their leis of “Pupu o Ni’ihau”. These are intricate shells that wash up on the island’s beaches. These miniature shells are painstakingly sewn together in to elaborate leis or handcrafted in to beautiful one-of-a-kind jewellery pieces. “Pupu o Ni’ihau” are the only shells in the world classified as gems by gemologists and can subsequently be insured as fine jewelry.

For a culture that chooses to live the life of their ancestors, the natives of Niihau are still relatively modern. They travel back and forth to Kauai commuting for work, school, or to visit family on the surrounding islands. There is a small US Navy facility on the island which contributes to the economy and maintenance of the island. The Robinson brothers also generate additional income by offering half-day helicopter tours and hunting safaris which they started in the late 80’s. The Niihua tours have been successful for the owners since prior to this, there was no way for anyone to see or visit the Forbidden Island. Careful not to disturb the natives, visitors cannot interact with the locals who live here and their village is off-limits. Tours depart from Kauai and visitors can spend three hours swimming, snorkeling, searching for shells, and are treated to a spot of lunch to keep the tummy from rumbling! The island is also home to as many as 80 of the remaining 150 endangered Hawaiian Monk Seals that still come close to the main islands giving visitors something else worth seeing. It is thought that there are no more than 1100 Hawaiian Monk Seals left, so the ones that come to shore here are a treat.

In today’s fast-paced world, it is rare to find a place like Niihau that remains virtually untouched or spoiled by modern technology making this an intriguing outing for Hawaii vacationers.  If you are interested in learning more about the Niihau “Forbidden Island” tours while here in Hawaii, our concierge service would be more than happy to provide you with additional details.